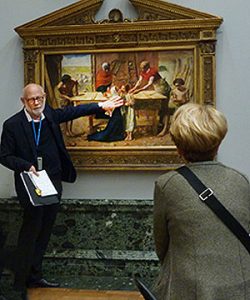 Erich Keel served as The Kreeger Museum’s Head of Education for fourteen years. Before joining the Museum in 1999, Keel was involved in the arts in Washington, DC and New York: he volunteered and freelanced at Corcoran Gallery of Art and worked for the Museum of Modern Art.
Keel was born and raised in Zürich, Switzerland, where he began his university studies in English, Philosophy, and Art History. He earned a Ph.D. with a dissertation on the French philosopher Maurice Merleau-Ponty from Emory University, Atlanta, GA. Keel is the author of “David Lloyd Kreeger: A Collector’s Journey,” in The Kreeger Museum (2009) and co-author of “Linking Art and Geography Education: A Museum Model for Elementary and Middle Schools” in Journal for Cultural Research in Art Education, volume 31 (2014). Since leaving The Kreeger Museum in 2013, Keel has been lecturing and leading art tours in Europe. He taught five courses for OLLI at AU on 19th and 20th -century art; gave talks at the Swiss and Austrian Embassies; and presented a lecture on the art of Max Beckmann, John Heartfield, and Felix Nussbaum to Smithsonian Associates. On separate art history tours, Keel led groups on visits in Germany (2013) Andalusia (2014), France (2015) and the UK (2016). His most recent international trip focused on museums in Prague, Vienna and Krakow, including the Art History Museum of Vienna, where Keel gave a gallery talk on Flemish painting.

Photo by Gary Peck, taken in the Tate Britain.