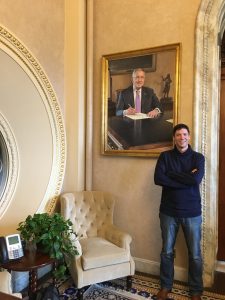 Gavin Glakas grew up in Bethesda, MD, and started drawing about the time he started walking. He studied with Walt Bartman in high school and at Washington University in St. Louis and the Slade School of Fine Art in London.

After graduation, Glakas spent a year and a half working on Capitol Hill as a Senate staffer. He had planned to go to law school, but after an eight-month illness culminating in the removal of a tumor from his lung at the age of 24, he decided to pursue his lifelong ambition of a career as an artist.

His paintings hang in the permanent collections of the United States Capitol, the Virginia State Capitol, universities, museums and numerous other collections both public and private.

He has won numerous honors for his artwork, including awards from the Portrait Society of America and the Butler Insti- tute of American Art. His paintings have been featured on NBC News and in The Washington Post, as well as American Art Collec- tor, Plein Air, International Artist, The American Scholar, Art Busi- ness News, The Strand and Elan magazines, and exhibited at mu- seums and galleries throughout the country.

Glakas teaches painting and drawing at the Yellow Barn Studio and lives in McLean, VA, with his wife and two sons.

Learn more about Gavin as he discusses his paintings. Click Here